Your workout of the day!

Rest 2 minutes between each round.

DAILY MINDSET
“I would rather die of passion than boredom.” – Vincent Van Gogh

There are times in our lives, whether it be during training, at work, or at home, where we question the choices we’ve made. They arrive shortly after we make an important decision. A form of “buyers remorse”, where we wonder if we’re on the right path. As humans, that’s what is safe to us, and we seek it out… knowing with certainty, in uncertain times, that we’re on the best path forward.

But… do we really?

Uncertainty makes us feel alive. Those moments are etched into us forever, and are some of our fondest memories. If everything was known, expected, and pre-determined, life would be so horribly boring. It wouldn’t be a life at all. Where others may run from uncertainty, let’s embrace it for what it is, and create the life of memories we’ll look back on with pride.

If you are in the market for a blue Honda, all you see on the road are blue Hondas. It’s as if they are seemingly everywhere. In every intersection, passing us on the highway, and at the gas station.

Yet, they were there the whole time. We as humans have what’s called the “Reticular Activation System”, which helps us see more of what we’re actively thinking about.

It’s actually a survival mechanism. If we needed to look for food because we were about to starve, we prime our senses to find it. Or if danger was close by in the form of a man-eating predator, we’d prioritize our senses to be very aware of where the threat was, or where it could be hiding. It’s an incredible level of focus that we don’t realize we’re using, bringing what is on our subconscious mind into the conscious world.

DAILY MINDSET
“What you resist, persists.””

What would you think about if I told you to not think of a pink giraffe?

The same effect takes place if I tell you “don’t slow down” as you start your final 400 meter run in a workout. Our minds don’t operate well when we focus on what “not to do”. Instead of focusing on what not to do, let’s focus on what to do..

Let’s turn “don’t slow down” on that last 400m run into “I can hold this pace”. Transition “don’t eat those cookies”, “let’s go snack on some celery”.

If our thoughts become words, and those words become actions, we’re going to get what we focus on. So let’s choose wisely.

Use a PVC pipe, barbell, or LIGHT weight.

Add 3 Reps Per Round

DAILY MINDSET
“As I walked through the door to my freedom, I knew that if I did not leave all the anger, hatred and bitterness behind… I would still be in prison.” Nelson Mandela

Nelson Mandela was sentenced to 27 years in prison.
He had no bed.
He was routinely put in solitary confinement, with no end in sight.
He at one point was thrown into an empty grave, where he was sure he was about to be killed. But was instead, he was urinated on by the prison guards. For their humor.

What he went through is something no human being should ever have to endure.

Yet, to his inauguration ceremony as president of South Africa, he invited one of his former jailers. On another occasion, he invited out to lunch the man who tried to get him sentenced to death (instead of prison). And on his 20th anniversary of his release, Nelson invited a third jailor to dinner with his wife.

When asked why he would do this, why he would invite the very same people that tried to make his life miserable, he replied: “If I did not… I would still be in prison.”

DAILY MINDSET
“To succeed in life, you need three things: a wishbone, a backbone and a funnybone.” – Reba McEntire

As we start our day, let’s think about these three.

Wishbone – Nothing is too great, or out of reach. Faith and doubt are both self-fulling prophecies.

Backbone – The unbreakable will to give our best, regardless of the circumstances. Through the lens of the growth-mindset, every outcome is an opportunity to become better.

Funnybone – We do life for one reason: to enjoy it. If we aren’t enjoying what we’re doing, we need to find something else. As Oscar Wilde writes, “Life is too short to take things seriously.” Let’s enjoy the ride.

DAILY MINDSET
“Trade your expectation for appreciation, and the world changes around you” – Tony Robbins

Routines and habits become part of the norm. Morning coffee, listening to the radio, the drive to the field taking the kids to practice. We appreciate healthy habits, and let’s continue to reinforce them. There is however much to be said about taking a pause to our routine, to appreciate the fortune in our lives. The absolute abundance we are so lucky to have.

In a world where comforts are the “norm”, we want to consciously remind ourselves how good our lives are.
The thought of losing those precious parts of our day is a sobering one. But despite it being a morbid thought, we will. There will be a final cup of morning coffee for us. There will be the last chance for us to listen to the radio. And if we are lucky enough to have kids, there will be a last time we get to wait in traffic as we drive them to soccer practice.

As Tony Robbins quotes, if we can remove expectations from the norm, and replace them with a sense of gratitude, our entire world changes.

No Rest Between Rounds

Think back to a time in your life when you came in clutch for someone. One where your actions made a significant impact on someone’s life. Maybe it was a time where you showed up for a friend in a time of need. But you didn’t just show up… you went above and beyond. Not because of some expected return or alterior motive, but because you believed it was the right thing to do. You genuinely cared.

Think back to that day, and how that made you feel when you saw your impact. Think back to how it felt to know you made a difference. It felt good, didn’t it. Really, damn, good.

Science has shown us that one of the most powerful emotions we can feel, via serotonin, is released in mass at these moments. But what is even more interesting, is that it’s literally contagious. Think back to the last time you saw someone else doing something generous. Maybe it was as simple as holding the door open at the store for an elderly customer. Think back to that… how did you feel, witnessing that? Did it make you feel, more generous?

If generosity is contagious, it just needs to be started.
Let it be us.
Be the change we want to see in this world.

Every 2 minutes for 12 minutes:

DAILY MINDSET
“If failure is not an option, neither is success.”

That’s a dangerous person. Dangerous enough… to accomplish something great.

We all have a comfort zone. A status quo. It’s warm, cozy, and familiar. But it’s a box, with a ceiling and walls that we can see and touch. It’s a world that cannot grow further than what it’s already grown to.

If we want to grow, we have to climb out of that world into the unknown. To face that chance that we may fall flat on our face, because we’re walking in new ground. Yet, as much as a “swing and a miss” may sting a bit, there’s something far worse. Worse than any of that is the pain of knowing that we didn’t try.

Life is so short.
There’s no time to bunt.
Let’s swing for the fences.

We’re not going to pretend the hard times go away. And that we won’t need to do things that we’d rather not. We have commitments, obligations, and bills to pay. But when we find ourselves in a daily loop of non-stop “work”… we won’t feel like ourselves.

But it’s not the time we put in at work that causes this. It’s the time we don’t put in on the other things. Our passions. The reason why we get out of bed in the morning. Yet in the furious pace of our lives, we let it fall to the wayside because we need to get “back to work.”

Choose barbell weight 15/35/45/+ depending on the intensity of the day’s workout you’re looking for.

Similarly choose your cardio distance depending on the intensity of the day’s workout you’re looking for.

View and register for indoor open gym time and outdoor WODs through WODIFY!

Don’t have a membership? Checkout our Summer of Sweat (SoS) Deal! 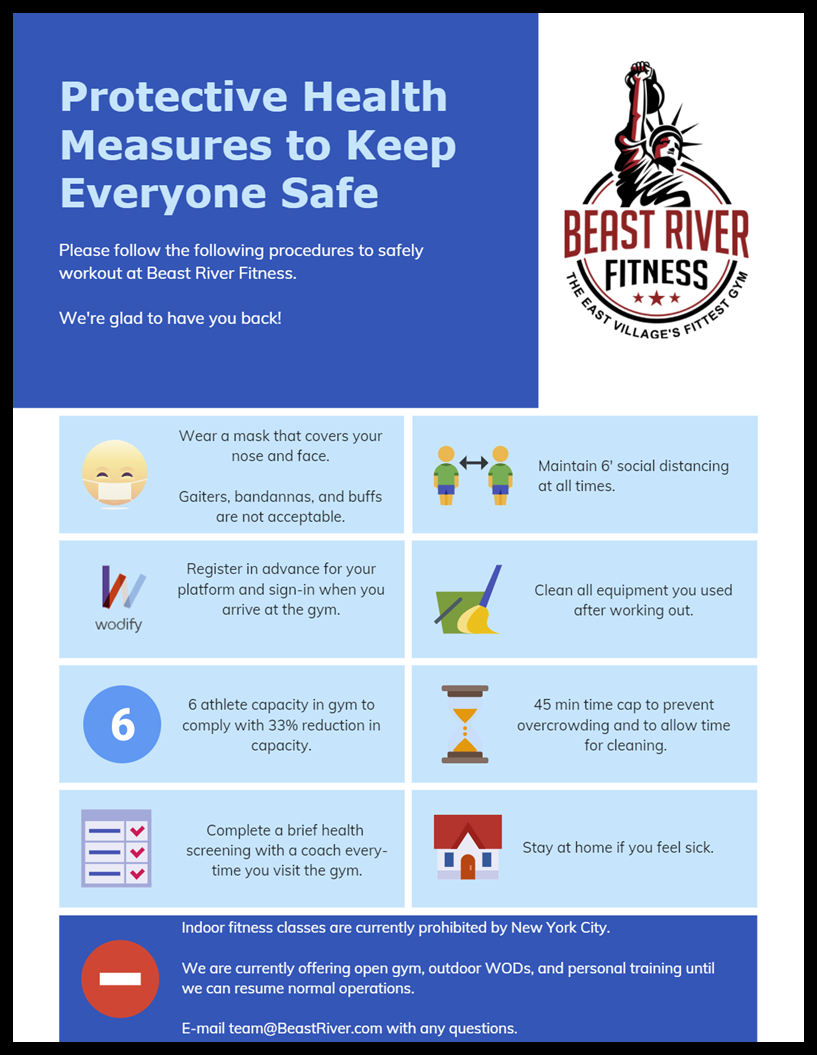